Skip to content
I was making a salad yesterday and had this huge green pepper that I was about to cut into pieces when I had an idea! 🙂 I poured drinking water into it and gave to Tim as he always loves new stuff especially if it’s something like…hmmm..pepper-cup!! 🙂 He drank all the water and then wanted to eat the cup.:) I usually say no…but in this case I was like sure you can eat it, honey! He never eats pepper but now he ate almost half of it! And the other half went into the salad. Well…some healthy eating tips for parents…:))) 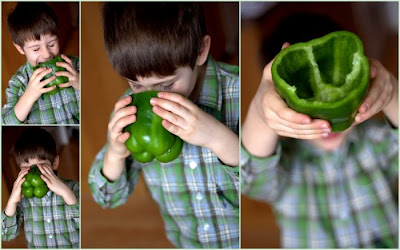